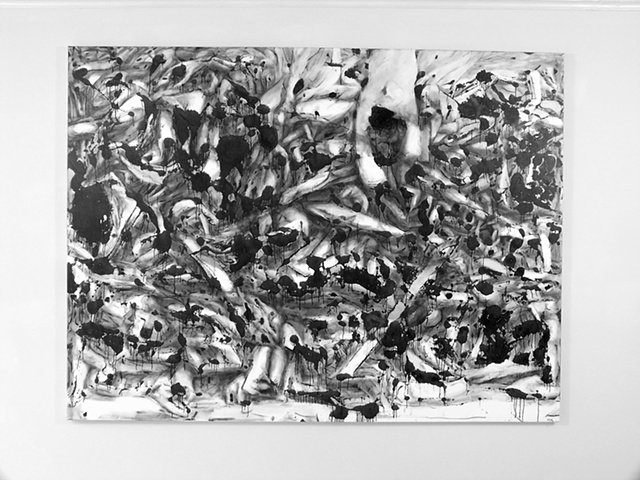 My work is derived from a process of mark-making which reflects the natural movement of the human body. The resultant, organic arabesques and use of chiaroscuro configure themselves into palpable, if imaginary, forms and space, eliciting a response from the viewer which is at once psychological and physical. My concern with light, although more metaphorical by nature (organizing and reflecting, rather than capturing light), is of significance as a vehicle for the poetics of my work, as is the psychological force of light and dark, motion and stillness.

My work exists within the interstices between Painting, Printmaking and Drawing. The work begins with printing ink applied and manipulated on Lexan until underlying structure and imagery suggest itself. It is then mono-printed by hand onto paper, causing various accidents to occur. As a result, the underlying structure opens to new suggestions, which are realized over time using India ink, charcoal and chalk, or with oil paint. The paintings in color also employ this same process, the mono-print serving as a species of under-painting which, allowed to dry, is then painted over with oil color. The resultant pieces, as a consequence of this twofold process, are neither works completely of figuration nor of abstraction but works in which form and space are both structured through the imagery that continually presents itself during the evolution of each piece. Rather than adhering the rather arbitrary denominations of "abstraction" or "figuration", the work which results from my process could be called works of “configuration”, in which figurative and abstract elements co-inhere.

My work evokes a pictorial space analogous to the space we experience in the larger, phenomenological world. This results in pieces to which the viewer has both an intellectual and a physical (somatic) relationship. Since experience through the body’s senses is integral to our conceptual relationship to the world, a multi-valence of meaning is carried by and derived from the co-inherent actualization of form and space intrinsic to my work.